I haven't posted much in the past few weeks.  We've been keeping very busy around here.  We are having some work done in the yard at our home.  I cannot wait to show the finished products.

So when I haven't been writing, we've been crafting/cooking around here.  I think I mentioned that Ryan is currently obsessed with My Little Pony.  He and I watched a youtube video about My Little Pony cupcakes, and after that he just had to make some.

Ours were a little different than the ones on the video.  Ours were inspired by the pony named Rainbow Dash. (Ryan's Favorite!) 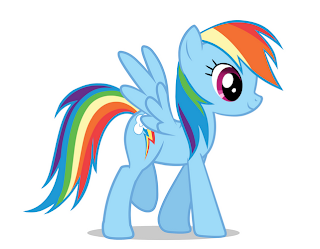 We made Rainbow cupcakes from regular white boxed mix and some food coloring.  Other than leaving us with lots of dishes to clean it was easy and fun. 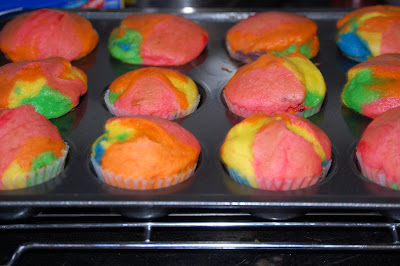 We frosted them in light blue buttercream. 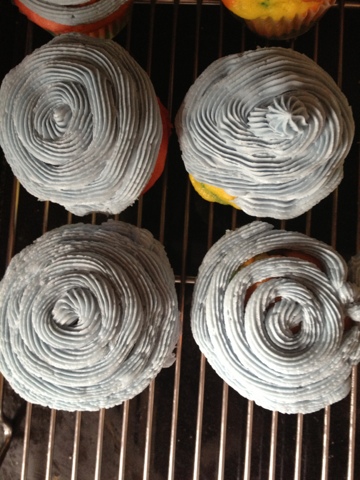 Not only were they cute, but they were delicious too.  And Ryan thought it was such a special day to eat My Little Pony Cupcakes. 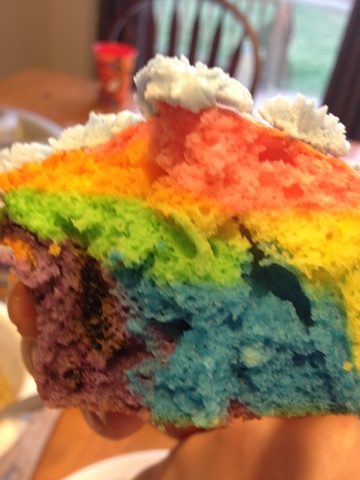 Since the front yard was getting a bit of a facelift around here, I decided the wreath needed an upgrade too.  I really wanted to make something, but I didn't want to spend an arm and a leg doing it.  I also wanted it to be easy. 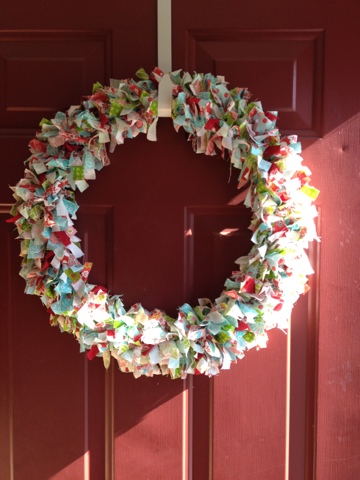 I found this tutorial here.  It shows how to make this really easy wreath.  The wire frame was less than $4 and the fabric was $13.  If you use coupons it will be less.  You just tie the fabric around the wire frame.  It took quite a while, but it was super easy so I didn't mind taking the time to do it.  Overall, I'm happy with how it came out. 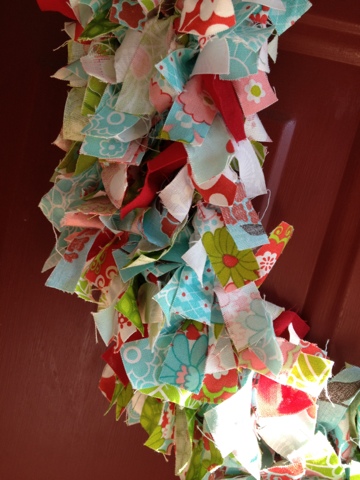 So that's what I've been up to.  How about you?

4 comments:
Email ThisBlogThis!Share to TwitterShare to FacebookShare to Pinterest

I cannot believe it is May already.  I'm so thankful for the warmth spring is brining.  Today I'm joining one of my favorite link-ups--Get Pin-spired.  This link up is to recreate some of your style pins on pinterest.  This link-up always helps me create new outfits using what's in my closet, and I need all the inspiration I can get.  This month I only have one to link up, but it was easy and cute.

Here is the pin.  (I couldn't figure how to embed the image this time.) 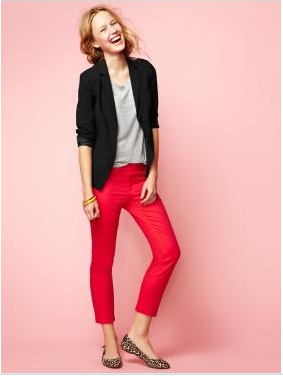 And here is my recreation. 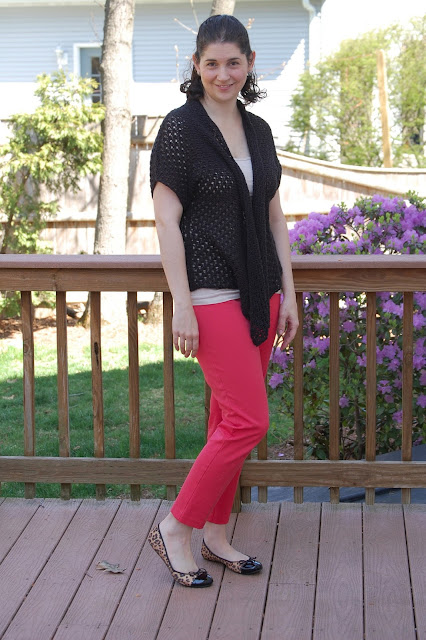 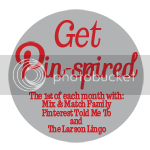 And since it's Wednesday I'm linking here too:

5 comments:
Email ThisBlogThis!Share to TwitterShare to FacebookShare to Pinterest

Ryan had his first ever soccer game the other weekend.  He absolutely loved it.  It is so cute to watch him learning something new.  It's good for him to get his energy out and play with little friends too.

They have little fields and play 4 V 4 for about 24 minutes each week.  It's nothing serious and just pure fun. 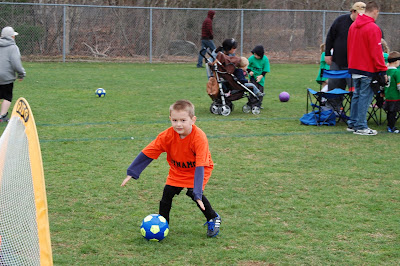 It's helping Ryan learn the rules of the game. 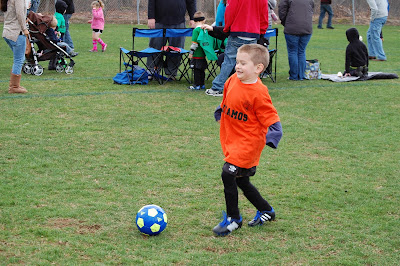 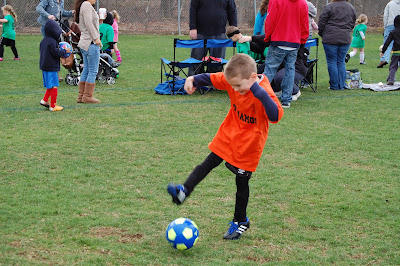 So this is how he dribbles the ball down the field. 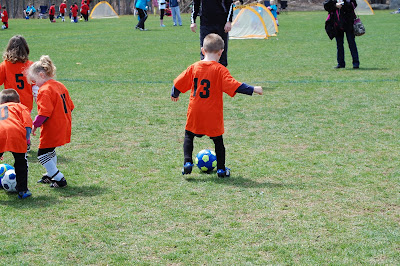 It may be the cutest thing ever. 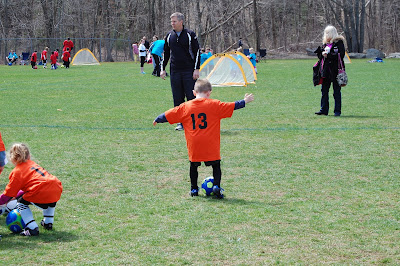 I cannot help but smile when I watch him trying so hard and being so adorable. 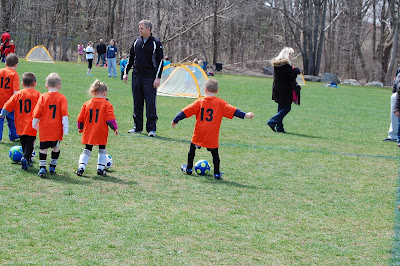 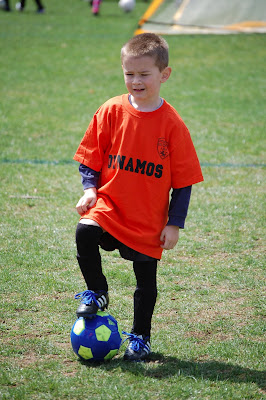 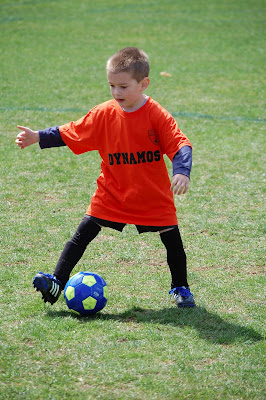 He looks like such a big boy here.  If he plays soccer when he's older, I am so going to have to compare this photo to one when he's a teenager. 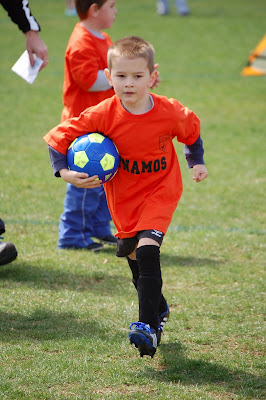 Can you see the little smirk on his face?  He's loving it! 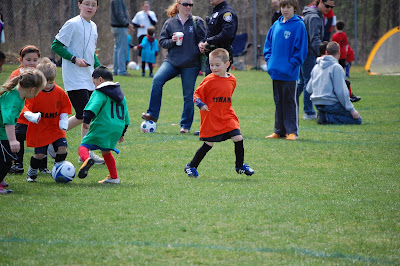 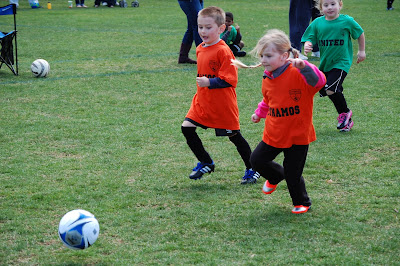 So now that I posted all the photos, let me tell you two quick stories about soccer with Ryan.

The first week, Ryan (and all the kids) had a lot to learn about the basic rules of the game.  I'll never forget one of Ryan's first plays in the game.  The ball goes out of bounds over the goal line.  There is a field just behind the field we are on.  Everyone stops waiting for the referee to bring the ball back....everyone except for Ryan that is.  Ryan goes and gets the ball and starts dribbling it down the field....only it isn't the field they are playing on, it's the field behind theirs.  He dribbles it all the way down that field and shoots at the furthest net.  The poor kid was so happy.  Everyone was just looking at him.  He hadn't a clue that what he was doing wasn't the norm for the game.   He was proud and so was I, and it really was such a cute sight ;)

This past week at his second game I tried to explain to him that when the other team has the ball, you can try to take it away from them.  Ryan never tried though, even when he was the only one defending the goal.  After the game I asked him why he didn't try to take the ball away from the other team, and he said, "They're friends too, and they need to win sometimes."  I couldn't argue with that! 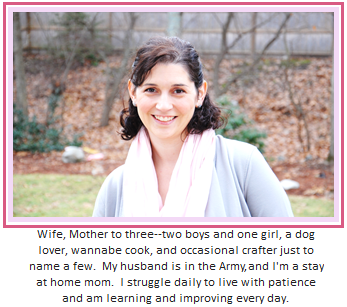 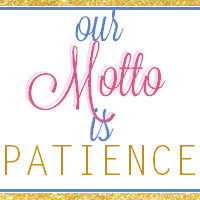 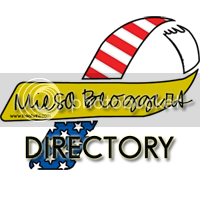